John Boas is one of the most respected and experienced coaches in Australia. He coached Gary Honey to an Olympic silver medal in 1984, and Ian Campbell to the 1980 Olympic final, as well as numerous other international athletes subsequently.
He is internationally renowned as a jumps coach, having lectured other coaches overseas and is accredited at level 5, the highest possible level.
As well as jumps, he also coaches sprints.

Peter Rule is a well-known coach, particularly in pole vault. He has coached many athletes to under age National titles, in pole vault, hurdles and multi events. He has also coached athletes who represented Australia at the World School Games.
He is an accredited coach at level 4, and is a regular presenter at level 2 coaches courses in pole vault.

Jeff is a qualified athletics coach with 40 years of experience coaching from juniors to seniors. Jeff tends to specialise in middle distance coaching where he has been successful with teenage boys and girls in events of 400 metres, 800 metres and 1500 metres.
In recent years, Jeff has been Coach of Cross Country and Coach of Middle Distance at Ivanhoe Grammar School, where the School has achieved considerable success.
Most of his coaching is conducted at Chelsworth Park in East Ivanhoe.

- James is a Level 2 Sprints and Middle Distance Coach, having gained accreditation over 10 years ago. James has a young family and has been heavily involved in coaching at Rosanna Little Athletics Club for approximately ten years and also held the position of Diamond Valley Relay Coach for a similar period.
In his prime, James was a fine 400m runner with a PB of 50.0 seconds and was coached by the late Dr. Brian Hodgson. In recent years, James has completed more than 10 full distance ironman competitions.
James specialises in sprints and middle distance coaching and has been involved in the training of Ivanhoe Grammar School students in both cross country and track over recent years.

Other specialist coaches can be arranged when needed. Whether you're a champion in the making or just looking to improve your fitness and have some fun, Ivanhoe Harriers can fulfil your needs. 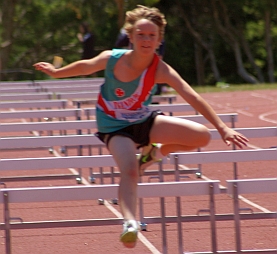